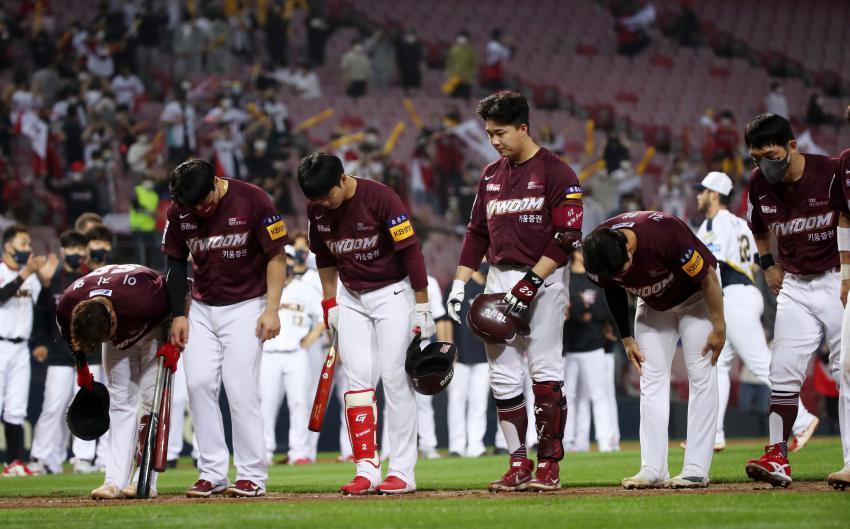 In this file photo from May 27, 2021, Kiwoom Heroes players wave to their fans after losing to the Kia Tigers 5-4 in a Korea Baseball Organization regular season game at Gwangju-Kia Champions Field in Gwangju , 330 kilometers south of Seoul. (Yonhap)

Two baseball players have been fined by local health authorities for breaking social distancing rules, in a further wrinkle to a damaging misconduct scandal that has rocked professional sport in the country.

The Gangnam Ward office in southern Seoul said late Saturday that it had fined a player from the Hanwha Eagles and the Korea Baseball Organization (KBO) Kiwoom Heroes for attending a social gathering. illegal. The players also face a potential police investigation for allegedly lying during a contact tracing investigation.

According to Gangnam officials, two Eagles and two Heroes met with three outside guests in a hotel room on Seoul Eagle Road in the early hours of July 5.

Private gatherings of more than four people were then banned in the greater Seoul area.

In this group, an undisclosed Hanwha player and Kiwoom pitcher Han Hyun-hee were not counted in their total rally size because they had been fully vaccinated. The unidentified Eagle was on the provisional Olympic list and received his two doses. Han, who was selected to the Olympic team in June and withdrew on Saturday amid the ongoing scandal, also received his two doses. These two also escaped the fines.

Even without those two in the equation, it was still a five-person gathering, meaning the two remaining ballplayers violated social distancing rules.

While acknowledging that their players had drinks with outside guests, the Eagles and Heroes said Friday they found no violations of social distancing rules.

Neither the Eagles nor the Heroes initially said their players were in the same hotel room at the same time. Their Friday press releases only stated that their players were out late at night or early in the morning without reporting their whereabouts to coaches or management, and made no mention of those players being together.

They simply trusted their players’ versions of the stories and were apparently unaware of the possibility – or perhaps ruled it out altogether – that these players may not have been cooperating with the contact tracers. .

On Thursday, four players from fellow KBO club NC Dinos were charged with lying about their whereabouts during contact tracing, after meeting two guests for beers on July 5 at the same Seoul hotel where the aforementioned Eagles and Heroes players had their reunion. .

The Gangnam Ward office has asked the police to open an investigation into the potential violation of the Infectious Disease Prevention Act by the four NC players. A Gangnam official said Saturday the district would consider doing the same with Hanwha and Kiwoom players.

Three positive cases from the Dinos and two more from the Doosan Bears — whose players have yet to be mired in a similar misconduct scandal — forced the KBO to suspend the regular season last Monday.

The league is heading into an Olympic break scheduled for Monday through August 9. (Yonhap)