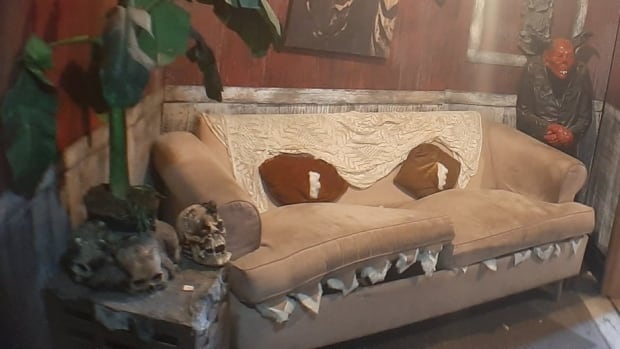 Halloween is back, but the pandemic has caused the haunted industry to reconsider a lot how scary it is.

Pat O’Neill, who has been designing Halloween haunts year round for four years, is currently working on three of them with Screamworks Inc. in Calgary and previously worked in Ottawa.

His busy season begins now. October is for building the lairs, November for tearing them down, and December for catching up on what has worked for other lairs across North America.

Ahead of the 2020 season, O’Neill made numerous adjustments to account for COVID-19 safety measures, including the elimination of STIF – an industry acronym that means ‘stuff in the faces’.

â€œIf you had a room that was just cobwebs on your face, you can’t have that. You have to knock them all down,â€ O’Neill said.

The same goes for fear shutters – the hanging pieces of rubber that often block one room from another in a haunted house.

In 2020, haunted designers like O’Neill walked through their designs and removed anything that would no longer be allowed under COVID-19 rules.

â€œIt was a curse right now, but there was a silver Catch-22 liner, because we changed the way we make things,â€ he said. â€œIt gave us the opportunity to be creative.

A new addition to one of Calgary’s hangouts is a people-eating couch – a giant puppet maneuvered by a person safely behind the wall. O’Neill found the sofa for free on Facebook and reused it.

Mark Saunders and Angela Grant Saunders, who have run Saunders Farm haunted attractions in Ottawa for 30 years, said the characters could choose to enter your personal space, now they’ll always be two feet away.

“How do you cause a really great fear of someone you’re scaring when you can’t, you know, jump right in front of them?” said Angela.

She has discovered that it is in the eyes that actors can engage guests, and actors have learned to fill more space with wider movements.

In their current attraction, The Sawmill, all of the actors will be wearing masks that have been designed to fit their costumes as closely as possible, while clearly being masks, so that guests feel safe and secure. All guests and staff will also be fully immunized.

While shouting doesn’t seem compatible with COVID, O’Neill stressed that there have always been risks for actors who get too close.

â€œWe always worked closely with the physique of the actors because before COVID, people would still punch you in the face. Fight or flight is real,â€ O’Neill said.

Grant Saunders says this year’s attraction has nooks and crannies that guests might not see, but the cast know it so they can step aside. Their choreography is also what helps keep the guests physically apart.

This is Saunders’ first centrally and electronically controlled den (it does not use levers or pulleys).

The entire space is designed so that guests are constantly on the move without ever staying too long in an enclosed space.

The lair is made up of a series of shipping containers positioned in a park. Each container is equipped with a camera to monitor the progress of guests to keep the crowds separate from each other.

If the guests are too afraid to move forward, a fear from behind will encourage them. If they think they can just walk through, they’ll likely run into other obstacles, Saunders said.

The goal of the person watching all the cameras is to separate the guests by about a minute and a half from the other groups.

Find “the dread and the spark”

If you’ve been a little too much in your head last year, Saunders and O’Neill suggest that a good scare might be just what you need.

â€œThere’s a lot to be said about the endorphin rush. It’s healthy to feel bad for a second and then come out of it,â€ O’Neill said.

O’Neill says it’s one of his favorite things about working in the industry – it’s different for everyone and if he can’t scare someone he wants to leave them with a ” wow “.

The industry was already changing before COVID-19, reconsidering its glorification of blood and guts, O’Neill said. Now he has a chance to leave some of his cheaper stuff behind.