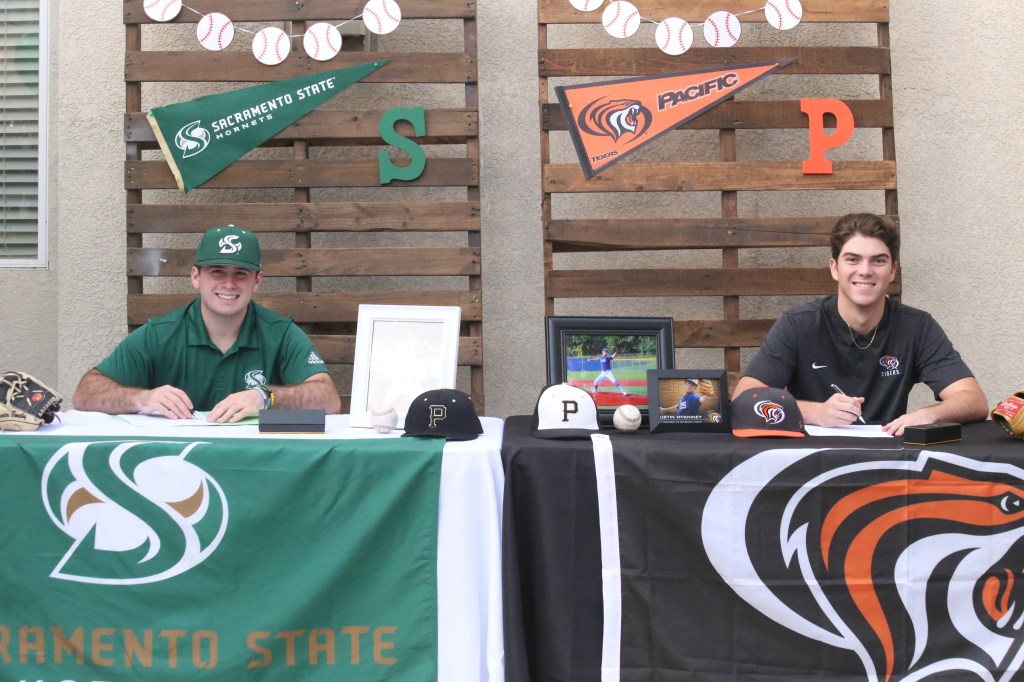 Each team has high hopes for a season. In the Golden Empire League, the Pioneer High School varsity baseball team were aiming for a winning trifecta of beating Woodland, claiming a league title and advancing beyond the second round of the playoffs.

So it was particularly bitter for everyone when the season was first postponed and ultimately canceled. But for two Patriot baseball players, a lost junior season didn’t hurt them in their quest for a spot in a college D1 program.

On Wednesday, Hunter Timothy and Austin McKinney signed their letter of intent to play varsity baseball at Sacramento State and the University of the Pacific, Stockton campus, respectively.

In a lost season, McKinney and Timothy both used social media to grab the attention of recruiters and college coaches.

The Chico Aces – a development travel team, which they both played on since their teens – would tweet or retweet videos of them launching. With connections everywhere, it was only a matter of time before they were noticed.

Timothy’s video pointed this out first. After tweeting a video of himself throwing at 91 miles per hour, Sacramento State’s interest was rekindled after he first spoke with him in January. After a few days of discussion, Timothy committed to Sacramento state in May.

McKinney also posted a video on his Twitter of him reaching 88 miles per hour. Stockton’s coach saw him, started to follow him and reached out. He announced his decision in September.

â€œThey couldn’t come and see me play, so I figured I should take any video I could make so they could see me there,â€ McKinney said. â€œI know Twitter was where most recruiters would be. All the coaches I spoke to told me.

As a 6’2, 190-pound right-hander, McKinney says he will only focus on pitching when he arrives on campus. He spoke to other schools including Cal Poly, San Jose State, and Northern Colorado, but after deciding he didn’t want to lose his place on the team, he accepted the offer of the University of the Pacific.

â€œI just want to be a good starter and someone they can count on,â€ McKinney said humbly. â€œI’m going to be a freshman so I’m going to have to work for my playing time. I just want to show them that I’m here and trying to make us better.

While there, he hopes to major in kinesiology and pursue something in sports science.

â€œI like that the campus isn’t too far from where I live,â€ McKinney says. â€œThe coach believes in me. I’m just ready to play competitive baseball. This is what I always wanted to do when I was younger.

Timothy also spoke with other schools but was always interested in going to Sacramento State. While not the tallest, the 5’9, 180-pound pitcher looks strong and sturdy and also throws quite hard.

â€œI love the coaches there and the big family feeling,â€ said Timothy. â€œI love the feeling of wearing the Hornet uniform. My goal is to be the best teammate I can and to throw harder and try to help the team win as much as possible.

He hopes to specialize in criminal justice and one day become a game warden.

Timothy and McKinney both battled over the league’s little diamonds before reuniting and playing for the Aces as a teenager. At Pioneer, they were both called up to college level during their first season. Timothy got the nod a game before McKinney.

Living next to each other, they found ways to stay in shape, either by going to the park to play long throw, lifting weights in their garage, or going to a local training center. Sacramento called Optimum Athletes. The establishment also regularly posts training sequences on Twitter.

Timothy credits the facility with helping him add five to eight miles an hour to his fastball. After doing the tour four times a week he is now able to hit the low 90s.

When it comes to their senior season, if there is one, both pitchers are hoping to anchor the rotation and lead the Patriots to a league title and hopefully beyond the second round of the playoffs.

â€œLast year was probably the best high school team I’ve ever known,â€ McKinney said. â€œI thought we had a legitimate chance in the playoffs. I wanted to see how far we could go as a team.

With optimism, a small dose of anxiety about not being able to play persists.

â€œI have a little anxiety about this year because I love to play with my high school friends and be with everyone,â€ McKinney said. â€œBut it’s a little easier to know that I’m committed. I can always find a way to go throw and do what I need to do.

If there is a season, both will be ready.

â€œI want to be in the league,â€ McKinney said. â€œI haven’t been successful in recent years. I want to make the playoffs, go through the second round and just beat Woodland. That’s all we’re talking about. This is the game we look forward to every year.