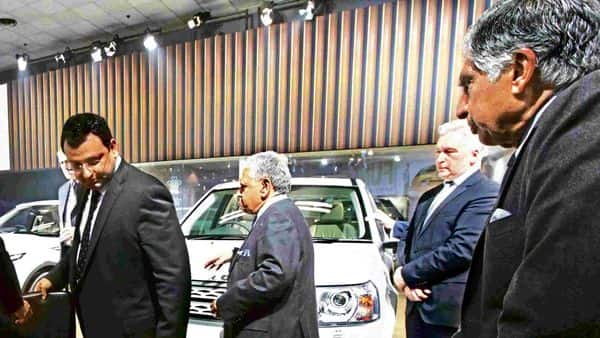 Mumbai: Family Mistry Controlled Shapoorji Pallonji (SP), which owns 18.4% of the capital of Tata Sons, filed a separation plan with the Supreme Court on Thursday proposing to exchange its entire stake in the group’s holding company for equivalent shares in listed entities. Tata Group and with a proportional share of the Tata brand value (adjusted for net debt) payable in cash or listed securities. For the unlisted companies of the Tata group, the SP group has sought an independent valuation also payable in cash and/or listed securities. “A selective capital reduction through extinguishment of shares of Tata Sons held by minority shareholders by exchanging them with shares of listed companies (say Tata Consultancy Services) would be a simple solution to provide liquidity to Tata companies and fair compensation for the SP Group,” the SP Group said in the motion filed with the Supreme Court, portions of which have been reviewed by the Mint.

According to people close to SP Group, Mistry Group’s decision to seek a cashless settlement marks a break from an earlier position where it considered accepting installment payments from Tata Sons over an extended period. The arrangement will help reduce the possibility of any additional debt on the Tata Group, the Mistry family said in the petition filed with the Supreme Court. Mint had reported on September 29 that the Mistry family is expected to share details of the offer in the Supreme Court, making it part of the relief it is seeking from the court in a minority shareholder oppression case. . The next hearing in the case is scheduled for November 3.

Although Tata Sons did not immediately respond to requests for comment on the settlement offer, a person familiar with the group said the proposed terms may not be entirely acceptable in their current form. “Management and the legal team are currently considering the settlement request. But this is very different from the original stated intention of a complete separation from the Tata Group. This type of arrangement would in fact give the Mistry family, which is largest shareholder of Tata Sons, more weight in listed companies by virtue of their shareholding,” the person said on condition of anonymity. Mistry’s offer is likely to be the promoter’s proposed stake split. in Tata Consultancy Services (TCS), which is the most valuable company in the Tata stable and the sustainable source of capital for Tata Sons,’ said a second person, a former Tata Sons manager.

On September 22, the Mistry family, who are fighting multiple lawsuits with the Tata Group, said a separation from the Tata Group was necessary due to the potential impact this ongoing litigation could have on livelihoods and the economy. For this, the family said it was crucial that a speedy resolution be found to arrive at a fair and equitable solution that reflects the value of the underlying tangible and intangible assets. The statement follows a long legal battle between the two groups, which began in December 2016, after Cyrus Mistry was removed from his position as chairman of Tata Sons in October of the same year. In December 2019, the National Company Law Appellate Tribunal (NCLAT) ruled in favor of the Mistry firms. The final straw fell on September 5 when Tatas objected to SP Group’s decision to pledge its stake in Tata Sons to lenders to honor its debts. Analysts say a full takeover of the Mistry family’s stake would require Tata Sons to make an upfront cash payment of ₹1.75,000, which in turn adds significant debt to the Tata Group which continues to face headwinds in many of its businesses. “While the SP Group structure reduces the cash burden on Tata Sons, the exchange of shares with those of listed companies only reverses what Tata Sons has been trying to achieve over the past 24 months – reinforcing equity and reduce cross-shareholdings in the operating subsidiaries. But having decided to separate, it is up to the two groups to work together to find a sensible exit in the interest of all stakeholders,” Hetal Dalal said. , COO, advisory services to institutional investors.

* Thank you for subscribing to our newsletter.