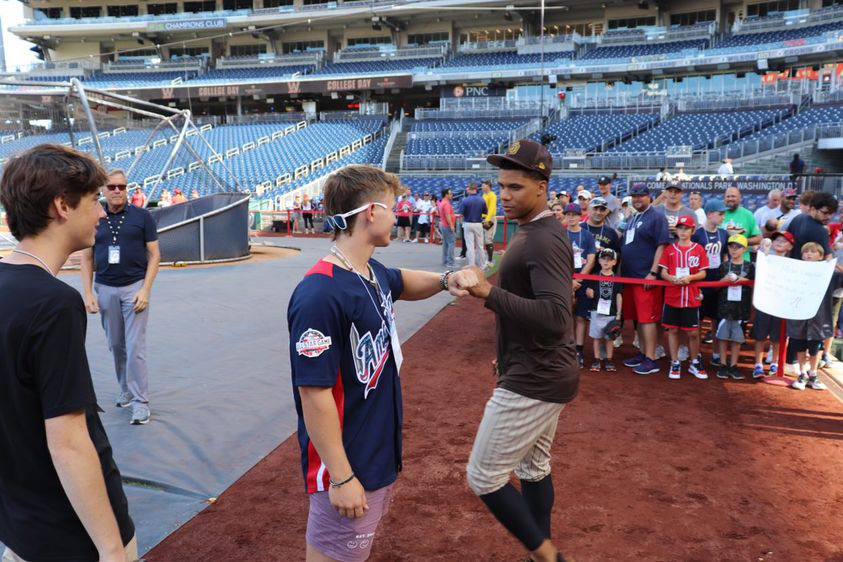 Juan Soto. Kyle Schwarber. Francois Lindor. Justin Verlander. Any baseball fan could see them on the big screen or as a dot in the stands. For Liam Holland ’24, these players were just yards away.

As one half of baseball content platform @batboysbaseball, Holland interviewed them all. A joint effort with friend Eric Shellhouse, a junior at James Madison University, @batboysbaseball has amassed nearly 195,000 followers on TikTok and 77,000 on Instagram.

Childhood friends Holland and Shellhouse have always loved baseball, sharing their passion for the Washington Nationals and playing together for years on travel teams. However, during their senior year of high school, the COVID-19 pandemic hit, leaving them without an official league to play in. So, in May 2020, they dedicated their time to something new.

“So we started making videos,” Holland said. “At that point, it was all the videos you could think of. We would go out and play with our friends, do any kind of MLB analysis videos, little challenges – anything you can imagine your friends fucking on a baseball field.

After a year, the duo began filming content in stadiums. They reached out to minor league baseball teams, working with four teams until their connection to the Fredericksburg Nationals gave them an opportunity with the Washington Nationals.

“Basically, through that connection, we were able to get that media access to major league games and that’s how we started talking to all those players that we’re sort of known for,” Holland said.

“I realized, ‘no, there’s a demand for that. There is an audience for that. And once Liam opened my eyes to the fact that this was actually a future career path for us…then it got a lot more serious for me.

Starting college at different schools less than a year into the accounts, the two had initial doubts about continuing their endeavors.

“I told him a couple of times, ‘I just don’t know if it’s worth it, like we’re becoming a pretty cool audience, but maybe it was just a summer thing'” , Shellhouse said. “And I didn’t know if I saw much of a future…And then I realized, ‘No, there’s a demand for that. There is an audience for that. And once Liam opened my eyes to the fact that this was actually a future career path for us…then it got a lot more serious for me.

The duo strategized for success, learning to better understand content creation and algorithms. They continue to spend time editing and uploading content daily.

Now the account is known for short interviews with major league players. Using their press passes, Holland and Shellhouse enter stadiums hours in advance to capture baseball’s pre-game energy and speak to players warming up.

“When they get to the warm-up track, where we’re stationed, we’re basically like, ‘Excuse me, do you have a minute for some personality questions? “Holland said. “A concise way to describe what we do – not just another basic interview that will take a lot of time, it’s just fun questions that will market these players and give them a social media presence. “

Asking players about anything from their walking song to their favorite pre-game meal, Holland and Shellhouse keep the tone light on their platform. For Holland, these interviews are a way to build a real connection with the players.

“I think [the best part is] power, not least through our style…showing the genuine respect we have for them,” Holland said. “I feel like we can speak for a lot of fans when we interact with them…we want to put them forward and we’re spreading good vibes.”

“My favorite, just because he’s known to many as the GOAT, was being able to interview Mike Trout. He came into the league in 2011 when I was in elementary school at the time and I just to see him grow in the league while I was growing up. It was really surreal because it was a full circle moment.

Over the years, Holland has interviewed several big names and had the chance to meet heroes from his childhood.

“My favorite, just because he’s known to many as GOAT, was being able to interview Mike Trout,” Holland said. “He came into the league in 2011 when I was in primary school at the time and I just saw him grow in the league as I grew up. It was really surreal because it was a full circle moment.

When he’s not contributing to @batboysbaseball, Holland plays for the College of William and Mary baseball club and is a recruiting officer for the Sigma Chi fraternity. Balancing these activities with her courses as an international relations major and a minor in Spanish can be a challenge.

“[Eric and I] are both students, it’s so hard to balance anything besides coursework because you always want to take academics seriously,” Holland said. “And with the baseball playoffs going on right now, it’s the most important month of the year for baseball, especially in terms of being up to date with MLB stuff. Half of our communication is about what to post…because there’s a strategy involved with players making headlines, you want to post our interview with them.

However, Holland’s courses and content creation are not completely independent; he finds applications for his courses in the field of baseball.

“What I learned in the international relations major here … can be applied to the world of baseball because they have all these international relations with the countries where the players come from,” Holland said. “This summer I’ve spoken to players from 16 different countries…and a quarter of the league at the moment is from Latin America. So there’s a huge demand for Spanish speakers…first to help players adapting to American life, but also to market them because most of the time Latino players don’t get pushed… just because they don’t speak English.”

Holland predicts a bright future for @batboysbaseball, seeing it as a solid foundation for future endeavours.

“I think it’s going to lead to something,” Holland said. “We’ve been told so many times that life depends on who you know, not what you know, and [in] the sports industry, you need connections to find the right path. It’s already opened a lot of doors where we don’t know exactly what we’re going to do, but hopefully it helps us figure that out.