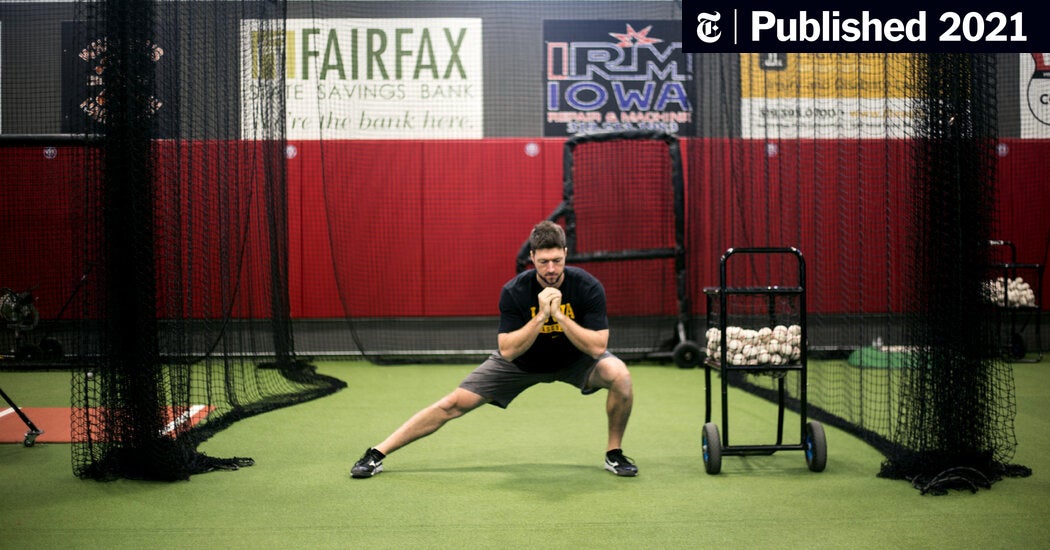 As his friends and former teammates train at major league spring training camps in Florida and Arizona, Colin Rea drags himself through the snow in eastern Iowa doing his best to prepare for the season in an environment that does not lend itself to play.

After pitching nine games with the Chicago Cubs last season, Rea signed with Japan’s Fukuoka SoftBank Hawks this winter. He expected to train in the heat of their camp in southern Japan when it opened on February 1.

Instead, Rea – like more than a dozen other players who joined Japanese clubs off-season – is in limbo. Japan closed its borders to non-citizens and new arrivals on January 4 in an increased effort to control the spread of the coronavirus. Originally in effect until February 7, the current entry ban now extends until March 7, but is continually being reviewed.

Until the border reopens, Rea prepares as best he can and tries to keep a sense of humor.

“I think high school was the last time I practiced with snow on the ground this late in the offseason,” Rea said in a recent phone interview. “I have access to a weight room and indoor enclosure so nothing outside at the moment but it’s supposed to warm up to 30 degrees so who knows?”

Rea is in regular contact with the Hawks, getting updates on the status of the trip and sharing videos of his workouts so the team can track his progress.

Despite the unusual circumstances, he has a strange familiarity.

“It’s kind of the same feeling as last spring and summer during quarantine and shutdown,” he said of Major League Baseball’s four-month suspension. “It was a week-to-week thing where we had to stay in shape and throw bullpens and throw live BPs and do what we could for practices. So to some extent I feel like I know what I need to do to stay in shape on my own and be ready.

Eric Thames is in the same situation. The first baseman and outfielder, who played for the Washington Nationals in 2020 after three solid seasons with the Milwaukee Brewers, signed with the Yomiuri Giants of Japan this winter. Instead of training with them in Okinawa, however, he’s stuck at home in Las Vegas cooking up a workout routine.

“There were about 15 guys working here, but they’ve all gone to their camps now,” Thames said in a phone interview. “It’s just me and another guy playing in the Mexican league this year. We throw BP at each other and just do what we can.

In a bygone era of Japanese baseball, foreign players would frequently jump into spring training after their Japanese teammates, thinking they didn’t need a longer training period. Thames, however, expected an on-time arrival, which became standard practice.

“People don’t understand,” he says. “You need all the time from spring training to prepare for a season. It’s important to master your timing, prepare your arms, prepare your feet, prepare your back. On top of that, it’s a time to get to know your teammates and build that camaraderie. We don’t even know our teammates yet.

Thames and Rea are among 20 players from outside Japan, a group that includes other major league veterans like Domingo Santana, Adeiny Hechavarria and Justin Smoak, who signed their first contracts with Nippon’s professional baseball teams. and are now – temporarily – stuck outside the country. There are another 50 overseas-based players who have returned to Japan. Many of them were on time for training camp, provided they had obtained a re-entry permit when they returned home last fall.

For new signatories, however, the travel ban is a problem on many levels. Not only is entry into the country prohibited, but the issuance of new visas has been suspended since December 28. This means that even after travel restrictions are relaxed, Thames, Rea and the other new signatories will have to wait up to five working days. before receiving the entertainment visa necessary for professional athletes to enter the country as paid entertainers. This secondary delay could place them precariously in Japan near March 26, which is the opening day of the 143-game season.

Yet even then, another perilous hurdle may await him: two weeks of quarantine.

Hiroshima Toyo Carp infielder Kevin Cron has experienced this before. He was the only new foreign signing among NPB’s 12 teams to enter the country before the travel ban, and was therefore able to join spring training for his team’s first practices.

La Carpe announced the Cron deal at the end of November, among the first overseas signings. A former member of the Arizona Diamondbacks, Cron describes himself as an “organizational freak by nature” and says he was obsessed with making sure his new team sent him his work papers so that he can apply for his visa quickly. He received it on December 23, just as news began to spread of possible increased travel restrictions prompted by the discovery of new strains of the virus.

Originally scheduled to travel to Japan in mid-January, Cron said Carp had urged him – twice – to reschedule to earlier dates this month. Then, while on Christmas vacation in North Carolina, Cron received a late-night call informing him that a ban was imminent.

Mask guidance. The Centers for Disease Control and Prevention has released updated data that suggests 90% of the US population is in a location with low to medium Covid-19 community levels and may now stop wearing masks.

The NFL is abandoning the protocols. The National Football League and players’ union have agreed to suspend all Covid-19 protocols, effective immediately. The league, which is not in season, is the first of the major professional sports leagues in the United States to end its coronavirus policies

He returned to Arizona on the first flight the next morning, packed his bags, and rushed to Japan. He entered the country on January 3, the last day Japan accepted new arrivals.

After that whirlwind trip, Cron had to endure the two-week quarantine period that likely awaits Thames, Rea, and the rest of the new signers.

“I was hoping there would be a way to go out and train every day, but I couldn’t even leave my apartment to take out the trash,” Cron said in a phone interview from Japan. “The team brought me workout tapes and stuff, and my coaches back home sent me home workouts they created at the start of the pandemic.”

A quarantine requirement will make an already improbable goal – getting ready in time to play on opening day – impossible for the rest of the stragglers. Noting that there will be no such requirements for athletes arriving for the Tokyo Olympics in July, some Japanese baseball players are pushing to drop the requirement.

Thames’ new manager with the Giants, Tatsunori Hara, explained this to Japanese reporters at the start of spring training. He also enlisted Koji Murofushi, the commissioner of the government’s Japan Sports Agency and gold medalist at the Athens Olympics in 2004, to help ease the rules.

“There has to be a way to relax the rules as they apply to athletes without disrupting society as a whole,” Hara said. “It’s not just about baseball players. This concerns all athletes. Two weeks of inactive quarantine is detrimental to their profession.

Brad Lefton is a bilingual journalist based in St. Louis. He covered baseball in Japan and the United States for over 20 years.