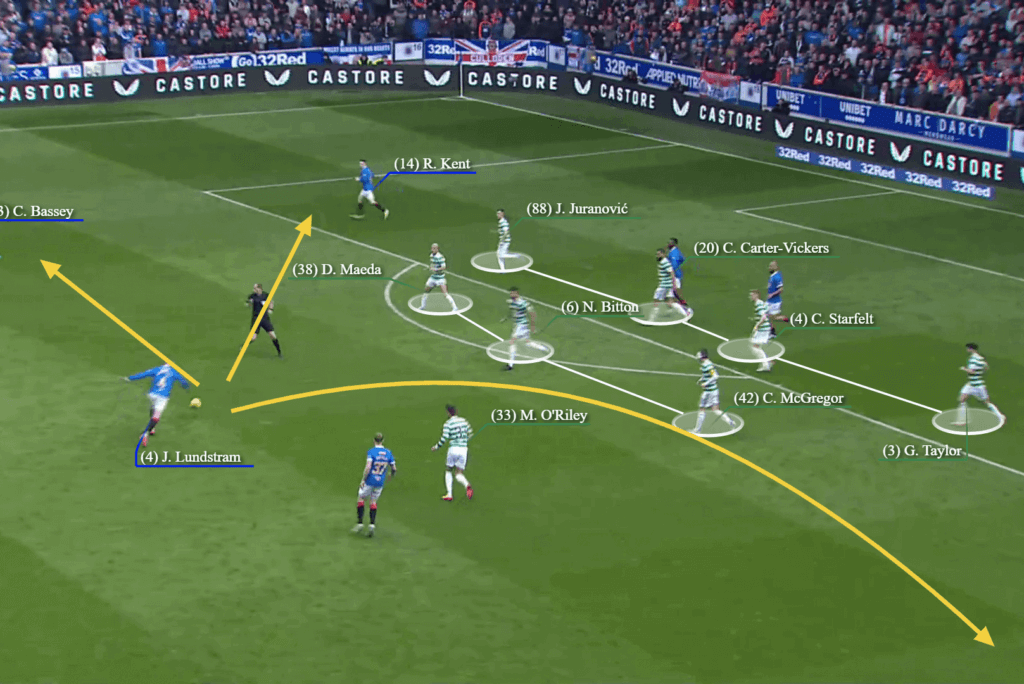 You can break down Ange Postecoglou’s tactical philosophy into three fundamentals: how his attacking players create and exploit space, how his full-backs reverse to better control the middle of the park, and how his team systematically presses opponents.

One aspect that wasn’t in the cards before the Australian’s arrival at Celtic Park last summer, however, was his teams’ ability to stay compact and smother opponents.

There’s an irony in the way Celtic saw off the 2-1 win over Rangers at Ibrox on Sunday which could, by June, be seen as their most important game of the season – in the second half, their organization mirrored how other Premiership teams, such as Livingston and St Mirren, set up to take points them earlier in the campaign.

Without the ball, these two clubs stuck to a narrow 4-4-2 or 4-5-1, filling their penalty areas with bodies and inviting Celtic to hit crosses rather than allowing them to play on their points. highlights of vertical passing football: Celtic had 43 crosses in a goalless draw at St Mirren just before Christmas, 37 in a goalless draw at home to Livingston in October and 35 in a 1-0 defeat at Livingston the previous month.

Celtic did something almost identical in Sunday’s derby triumph – hosts Rangers attempted 42 crosses but only produced an expected goal tally of 1.15, according to Opta. Their first cross of the game found Aaron Ramsey’s left foot and was guided past Joe Hart after just two minutes. second period.

But that wasn’t present in that first half – especially in the first 10 minutes. The spread of centre-backs Carl Starfelt and Cameron Carter-Vickers was poor in early exchanges, but Celtic’s biggest problem were the spaces between a) their midfield three and their full-back four, and b) between full-backs and central defenders.

The Premiership leaders started the game shaky, almost conceding again when Ryan Kent nearly flew past Josip Juranovic, who had a poor first half but recovered in the second.

In the example above, James Tavernier leaps past the otherwise outstanding Greg Taylor after that tough opening, and floats a cross for Kent. Thanks to this passage of play, Taylor is pushed so far that Daizen Maeda has to replace him behind, while the three midfielders are outside their penalty area until Tavernier delivers the cross.

Although the delivery overtakes Juranovic and Kent, there is still plenty of space in the box for other proactive Rangers players to rush in central areas.

Despite this, Celtic kept their composure on counter-attacks and set pieces, and led 2-1 just before half-time.

It was then that the tactical switch was flipped and the space that had been abundant for Rangers in the first half was closed.

Callum McGregor explained afterwards that Postecoglou reiterated to his players that when Celtic have the ball, all 11s need to think about how they can help create a goalscoring opportunity. But when they don’t have possession, they all have to think about how they can stop the team from conceding one. This secondary goal was clear after the break.

Compare Taylor’s positioning below to where he is in our first screenshot.

He’s narrower and relies on winger Filipe Jota to come out and try to shut down the cross, meaning he’s better placed to stop a low delivery to the front post. Celtic also settled into something approaching a 4-4-2 – although it was practically a 4-5-1 given how often Maeda followed – midfielders s ‘installing roughly in line with the penalty spot, like another row of defense. against the Rangers crosses.

When Starfelt heads into John Lundstram at 35 yards, he has options to his left and right. Both Celtic defensive lines are rigidly narrow to force Lundstram’s pass wide, but he opts to try a shot from distance, which Hart recovers after a deflection.

It was in the 66th minute, when crosses weren’t working because Celtic had cluttered their penalty area with bodies and the central spaces were too crowded to attempt passes to or inside the box.

While the tactical change worked, setting it up this way doesn’t mean much if your centre-backs aren’t producing the level of performance of Starfelt and Carter-Vickers.

According to Instat, Starfelt made 18 interceptions and six successful challenges, and won four aerial duels on Sunday. Carter-Vickers had nine interceptions, had nine challenges and had six aerial duels. The pair of them might have their issues when on the ball, but they showed great defensive fundamentals.

A final example of how Celtic form canceled out crosses came in the 85th minute.

Taylor had to leave injured in the 71st minute, so Juranovic moved to left-back with Anthony Ralston brought in on the right. Like Taylor in the previous grab, Juranovic holds firm on the edge of the Celtic box rather than drifting towards the farthest player. The tightness of the halfway line behind Juranovic also means that Fashion Sakala’s only forward options are to either try to beat the Croatian himself or pass him through for Tavernier to strike another cross.

He does the latter, but look at how many Celtic bodies are between Tavernier and intended target Kemar Roofe near the midpoint. Starfelt clears the ball for a corner.

This compactness was a perhaps little-seen tactical adjustment coming from a manager who is often described as an attack-obsessed ideologue, but it fits into a pattern of pragmatism we saw in the first season of Postecoglou. in Glasgow.

After the October international break, Celtic were attacking less recklessly and focusing more on game control. He prioritized physicality against Livingston last month. He rationalized Giorgos Giakoumakis’ role as a no-frills poacher rather than having him clumsily work as the quintessential No.9 postecoglou like his colleague Kyogo Furuhashi.

He has adapted to his staff at Celtic and the rigors of Scottish football, but his underlying principles are preserved.