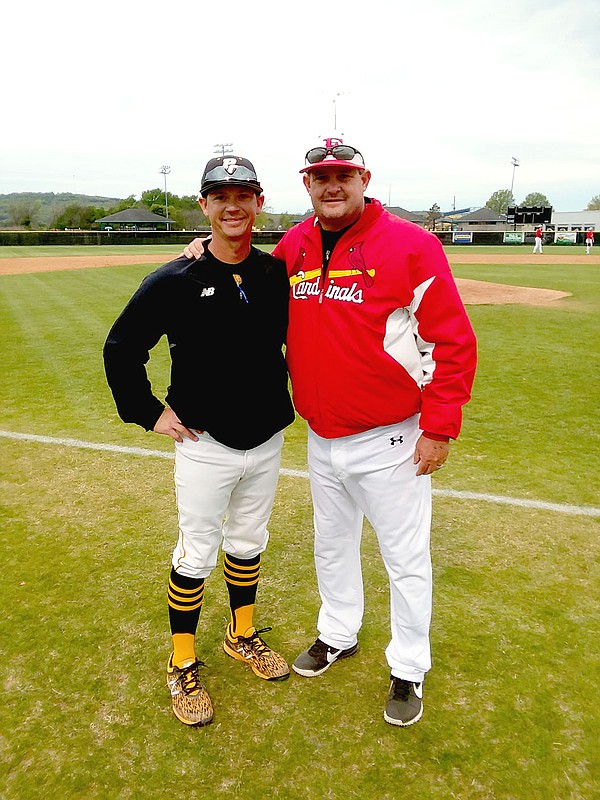 PRAIRIE GROVE — Mitch Cameron has Prairie Grove baseball competing at a level Tiger fans have grown accustomed to from 2009-2015 while Jay Harper’s Farmington Cardinals own the district tournament seed.

The rivals faced off Thursday to wrap up conference play, and the game had all the elements of a classic battle that baseball fans love to rehash.

“They competed and it’s a quality ball club. Again, it’s a rivalry between Prairie Grove and Farmington that always plays out that way,” Cameron said.

The victory ended a seven-game losing streak for Harper in one-on-one clashes against Cameron, who used the services of Toronto Blue Jays Major League pitcher Ty Tice (Class of 2014) and of St. Louis Cardinal 2019 rookie Logan Gragg (Class of 2016), along with a cast of other talented players to build the streak from 2013 to 2015.

“Mitch and I are really good friends and I knew it was going to be a battle,” Harper said. “We’re happy to beat Prairie Grove anytime, don’t get me wrong, but Mitch and I have a sort of rivalry between us as coaches and that means a lot to him too; you can say that after the game, and he means a lot to me.”

Harper now boasts a five-game winning streak in the rivalry series, including wins over Chris Mileham and Jed Davis, and hasn’t lost to the Tigers since April 27, 2015.

For the second time in as many days, Farmington used a late-inning rally to secure a baseball victory, then fended off an opponent on his last at-bat.

Six points in the top of the seventh propelled the Cardinals on the road to rival Prairie Grove 8-3 on Thursday; and Friday Farmington again found a way to win, scoring two runs in the bottom of the sixth at home to beat Bentonville West, 2-1, to cap a 3-0 week that started on the road at Pea Ridge on Monday April 19 with a 13-3 Cardinal run-rule win.

The Cardinals’ comeback victory over Prairie Grove granted them a share of the conference crown and the No. 1 seed in the 4A-1 District Tournament, which puts them on the opposite side of the co-champion bracket. of the conference, Harrison and Shiloh Christian, this week. At 5 p.m. Wednesday, Farmington hosts the winner of Monday’s play-off between Berryville and Gravette.

Meanwhile, Prairie Grove beat West Fork, 7-1, as Davis Stephens had three of the Tigers’ 10 hits while scoring twice. Sloan Smith drove in three runs for Prairie Grove, which scored three in the sixth. Sophomore Ryder Orr had two hits and an RBI. Senior Jackson Sorters picked up the win by scattering six hits and striking out two in a complete game that required 77 effective pitches.

Sorters, who isn’t great at 5-4, wakes batters up with his first pitch, much like the 5-foot-9 Tice, who made his Major League debut on April 9 after a frustrating 2020 at the during which covid robbed him of an opportunity to break into the big leagues when the minor leagues closed.

“He stayed on that reserve last year. He kept waiting for that phone call, you know, and when you get in there, it’s gambling and they wouldn’t pull it and start it and start it. his clock and stuff so he was a little frustrated,” Cameron said. “But he knows he should be there. He’s been fighting and he’s had his chance this year, so he knows it’s coming. He’s going to get a full-time offer, I’m sure, at a given time.”

Cameron celebrates his return to Prairie Grove every time the Tigers enter a ballpark.

“Coming back and being able to compete like we do is good. That’s what we wanted,” Cameron said.

“We have guys who want to be here, guys who compete and love the game and do it right and that’s the most important thing is that the kids do it right.”

The Tigers begin the district tournament on the road in Huntsville on Wednesday. The first pitch is scheduled for 5 p.m.

Getting it right goes a long way in baseball and in life – just ask Ty Tice.

*Jay Harper served as Farmington’s head coach for all of those games.

Mitch Cameron took over as Prairie Grove’s baseball coach in June 2008 and served as coach until May 2015 in his first tenure with the Tigers.

Trib HSSN Baseball Players of the Week for April 26, 2021