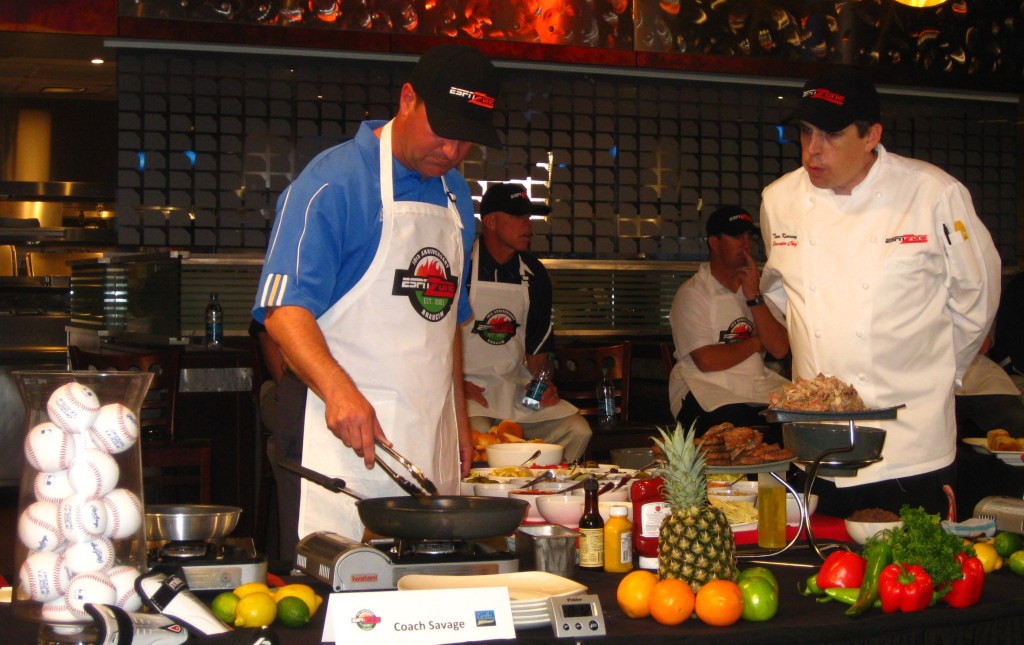 ANAHEIM –Something was burning, its smoke wafted through the ESPN zone of Downtown Disney on Wednesday morning during the Third College Baseball Coaches Cooking Challenge. And it was not the competition.

It was my esophagus. And what’s left of my stomach. And my teary left eyeball.

I had just taken a cheeky bite of UCLA baseball coach John Savage of the spicy pepper, chili, jalapenos, buffalo and cajun slider, his entry into this annual media event and the double local sports game on reality TV’s “Top Chef”, “Hell’s Kitchen” or “Kitchen Nightmares” or, in my reality, “Jackass 3D”.

Click on the “Photos” tab above for a slideshow of the event.

Eleven coaches – from as far north as UC Santa Barbara to south of the University of San Diego, but not counting Dave Serrano sick of the Big West Coaches Preseason Poll, the unanimous favorite of the Cal State Fullerton poll – is come to represent the home that is Southern California. college baseball in front of hotplates in a duel.

The main course in the morning didn’t come in a signature slider, nor in a miniature burger or meat sandwich, which every coach turned kitchen cowboy concocted. What made these chefs special was their fellowship, their baseball fraternity.

They are the coaches who compete the most, playing in three-game weekend series. They hamper each other for the College World Series, sadly ending each other’s seasons. And yet, they all follow the same recipe for mutual respect, closeness, heartfelt friendship, and good humor that is special to the cloistered canoes of Southern California varsity baseball, but not as common in the bigger stakes, the higher turnover and larger contracts. throat worlds of college football and basketball.

â€œBaseball is a small world,â€ said Savage, whose Bruins enter third nationally this season through Collegiate Baseball after losing to South Carolina in the College World Series. â€œOf course we are competing on the pitch, but we also have a lot of respect for each other. We have a history and we understand each other in terms of ups and downs, stock market limitations, facility limitations, and the rough road from the west coast to Omaha.

While some coaches worked hard during their 15 minutes to blaze, others gathered in their ESPN Zone baseball caps and Chef’s (originally) white Clorox aprons, socialized and waited their turn to put on to the (hot) plate and caught up. .

Ducks announcers Steve Carroll and Kent French, present to host the event, walked around the microphone and gave the coaches a chance to be “The Last Comic Standing”. (Oh, that’s another show.)

â€œI love to eatâ€¦ and I love to order,â€ said Troy Buckley, first-year trainer from Long Beach State, who produced a pulled pork â€œDirtbag Sandwichâ€ as the panel of four judges, including myself, will spend more than nine innings. digest.

“It’s like I’m telling my players, ‘Know your limits and keep it simple,’ and that’s what I did today,” said Bob Brontsema of UC Santa Barbara, who warmed up grated pork in a skillet, sprinkled the meat with barbecue sauce, pushed it into a bun for an incredibly edible “Ole Special”. mocking coach â€œCPâ€ Cal Poly Larry Lee carved out of tomatoes in his Steve Carlton-inspired slider, â€œLeftyâ€.

Gallery coaches commented on their culinary awkwardness. They often burst out laughing as each coach reluctantly competed for the title of “Best Chef” of the day and piled on buns, rounds of pre-cooked Jenga chicken, pork or beef patties and all. assortment of toppings carefully prepared by ESPN Zone Anaheim’s Executive Chef. Tom Keaveny.

It’s not every day that you see venerable UC Irvine coach Mike Gillespie, standing in front of a smoking pan, vigorously trying to loosen a bun he has fry as hard as a rubber on the top. pitcher’s mound. Or UC Riverside skipper Doug Smith dodging a lake splashing with garlic and hot oil and wishing he had a catcher’s glove.

Or USC assistant coach Doyle Wilson, regretting that he randomly threw a monstrous 30-something mix of spices, sauces, and sliced â€‹â€‹veggies into a sizzling pan and wishing he was wearing a catcher’s mask. . (Wilson named his mystery meat dish, â€œNot good.â€ It was, surprisingly, not bad.)

“I actually enjoy this whole day – not so much the cooking stuff – but being here, having fun and being able to talk to the other coaches,” said Rodriguez, who defended his title of “Top Chef” with his mushroom. and his Swiss “Malibu”. Mud slides.

Conversation topics were broadcast in all areas, such as mushrooms in batting practice. They discussed how the Bruins, who turn over All-America pitchers Gerrit Cole and Trevor Bauer, are expected to make another playoff run with the Titans, who have won at least a share of eight of the Big’s last 12 titles. West and lost in three games. to the Bruins at the NCAA Super Regional last season.

They talked about the few long trips the west coast programs are taking because of budget restrictions. They asked about opposing players who came and went, got injured or got better. They even shared what they heard from their players about the revised NCAA standards for 2011 that do away with metal bats that significantly outperform wooden ones.

Gillespie, whose anteaters are tied with UC Riverside for second in the Big West coaching preseason poll, was the inspiration behind the Savage’s â€œGillespie’s Netâ€ digestive grenade.

â€œIt’s a certain lack of respect! Gillespie said, claiming to be insulted by Savage’s attempt to honor the coach who originally hired him as an assistant at USC and saw him rebuild UC Irvine and now UCLA.

â€œIn fact, a lot of these guys are in Southern California baseball and have been competing against each other for a long time,â€ said Gillespie, who was also a former soccer coach and basketball umpire. â€œThere isn’t that kind of genuine relationship and camaraderie between coaches of all sports and all places. When I start to play in the hall, there is no one for whom I feel good.

Well, that’s because he didn’t have to eat their cooking.